“If The Devil Wears Prada and Broadcast News had a love child, it would be this hilarious satire of the Washington circus.” —Arianna Huffington

Be noisy, her father always told her. So Natalie Savage grew up heeding his advice and focused her ambition on her reporting career rather than her personal life. Now her efforts are paying off. She has been offered the title of White House correspondent for her network. The only thing is that the position is temporary—a test to see if she has what it takes. She knows she has the grit, the principles, the news sense to succeed…except her competition is a twenty-six-year-old popular frat boy who got his big break by eating raw animal parts on a reality show.

Natalie has to navigate ratings wars, workplace sexual harassment and an international political crisis in order to prove herself. But the closer she gets to achieving her dream, the more she wonders if it’s worth all the compromise.

Funny, smart and timely, this juicy debut about reporting while female tackles fake news, the #MeToo movement and the fraught dance between reporting the news and the White House. Natalie Savage joins the ranks of favorite fictional heroines as she figures out that having it all doesn’t have to mean giving up everything she stands for. 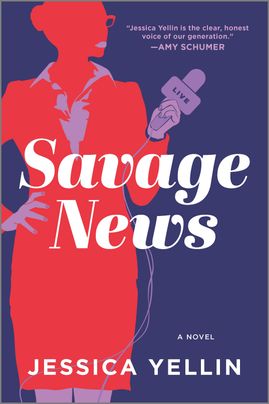